Even if you go back to the earliest descriptions of the land that is now known as Pennsylvania, you’ll quickly see how much of an impression its natural features has had.

Pennsylvania’s forests, rivers, animal life, and natural wonders never fail to grab the eye and command writers to describe it as best they can with their words.  This sounds a little dramatic, but then again many of the quotes you’ll see here are very dramatic too.

Seriously, just read Prince Maximilian’s descriptions of Pennsylvania in the 19th century (you’ll find one below). He bashes Pennsylvania’s cities and towns but only has nice things to say about its plants and animals.

Its important to note that Pennsylvanians haven’t always taken good care of its natural resources- many of the animals that once called this place home are now extinct and Pennsylvania’s forests were famously so depleted in the early 1900s that observers said the state was like a desert.

These quotes are good evidence that everyone can observe nature and has a stake in it. You’ll find journalists, folklorists, travelers, frontiersmen, and even a paper salesman have something to say here.

If you’re reading this and you don’t live in Pennsylvania, come over and check out its natural wonders. And don’t forget that this doesn’t happen by accident, it takes a lot of hard work, conservation, and deliberate action to protect Pennsylvania’s nature. Its been destroyed in the past and it can happen again.

And if you live here you know what I’m talking about. Go outside and check out Pennsylvania nature for yourself and write your own description like these people did.

Recommended Listening: “Gone Sugaring” by Mirah and “Susquehanna Waters” by The Broken Spokes. There are actually a lot of good sings about Pennsylvania nature, especially its rivers! These are some of my favorites. 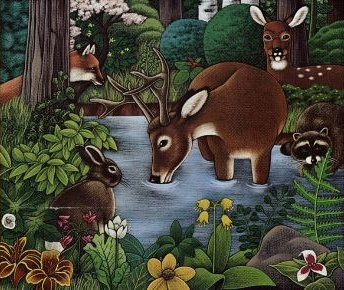 “The lure of the open road is now gripping the nation, and few States can offer a better spot for a real vacation than Pennsylvania. Within the borders of the State are found rugged mountains, picturesque lakes, trout-laden streams, and rich farmlands.”

“If a vampire bat was in the U.S. It would make sense for it to come to a “Sylvania,” like Pennsylvania.”

“In the woods of this district, we everywhere remarked that the tops of the branches, for about a foot or a foot and a half, were hanging down and withered, which is caused by a kind of cricket [cicada]. This insect, which is well known, appears only once in seventeen years, but then, like the cockchafer with us, in prodigious numbers, has abounded in Pennsylvania in 1832, and in many places was a real scourge; it does not, however, appear everywhere at the same time. But a few weeks before, they were so numerous in these forests, that the noise they made almost overpowered the human voice. On examining the withered twigs, we found the bark, as it were, ripped open in many places, the wood quite dry, and in the sap, a whitish substance, which consists of the eggs of the insect.”

“I have generally found snakes very numerous east of the Allegheny mountains, but the State of New York was never as badly infested with them as Pennsylvania.”

“All through Pennsylvania the story was the same, wanton, sordid, and unnecessary, the annihilation of a race of animals which could have been domesticated and furnished hides and beef to a vast population. Perhaps it is just as well that so few of the details of the passing of the Pennsylvania bison are available, as they would sicken and disgust all thoughtful and sensible persons. It is best that the waters of oblivion have closed over the entire horrible transaction, yet a word to the wise is sometimes sufficient to stay the hand that is bent on wiping out the remaining forms of wild life in the Keystone State.”

“There are few trips so delightful as that through the great coal fields of Pennsylvania…one can hardly choose amiss, from May, when the region puts on its robe of greenery, till November, when it assumes its gorgeous autumnal attire.”

Please picture me in the trees
I hit my peak at seven
Feet in the swing over the creek
I was too scared to jump in
But I, I was high in the sky
With Pennsylvania under me
Are there still beautiful things?