From Asylum to Prison: Deinstitutionalization and the Rise of Mass Incarceration after 1945
By Anne E. Parsons
University of North Carolina Press, 240 pp., cloth, $29.95

In the mid-20th century Pennsylvania operated one of the largest state-run mental health systems in the United States. Thousands of people worked and lived within the commonwealth’s many asylums and psychiatric hospitals. Since the 1950s, however, the state government closed many facilities and has taken steps to reduce the involuntary confinement of people with mental illness and psychiatric disorders. Yet institutionalization did not disappear from Pennsylvania, it transformed into today’s modern prison industrial complex as officials adopted more punitive criminal sentencing policies and built new prisons to house a surging inmate population.

In From Asylum to Prison, historian Anne Parsons meticulously traces the decline of the nation’s psychiatric state hospitals and rise of state prisons, through the lens of Pennsylvania. Based on extensive research in the Pennsylvania State Archives, she argues that “the politics of mental hospitals and prisons did not occur separately but were intricately intertwined.” Rather than deinstitutionalize, Parsons argues that Pennsylvania “reinstitutionalized” in the late 20th century , building new prisons to replace closed psychiatric facilities. Lack of community services, fear-based politics surrounding mental illness, and the economics of institutions meant that shuttered mental hospitals fed a cycle of incarceration that continues to grow in Pennsylvania. Many Pennsylvanians who were discharged from hospitals found themselves incarcerated in the state prison system shortly after. In fact, several state hospitals, like Farview in Wayne County and Retreat in Luzerne, were converted into state prisons under control of the state Department of Corrections.

This important book reveals the influence of modern mass-incarceration politics and mental health policy on each other. Readers, even those unfamiliar with the legal and medical specifics surrounding Pennsylvania mental health and criminal policy will be able to follow along as the prison swiftly replaced the asylum in Pennsylvania. Parsons’ use of archival documents, compelling stories of institutionalized individuals, and her own detailed interviews with key actors makes From Asylum to Prison a captivating read. 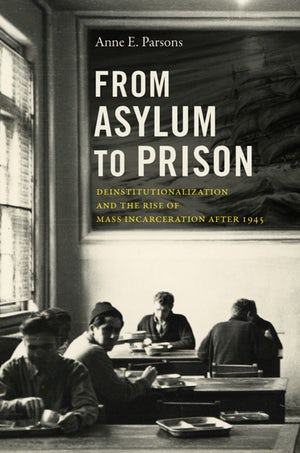