This post is based on an article that was previously published in Pennsylvania Heritage, Summer 2019. 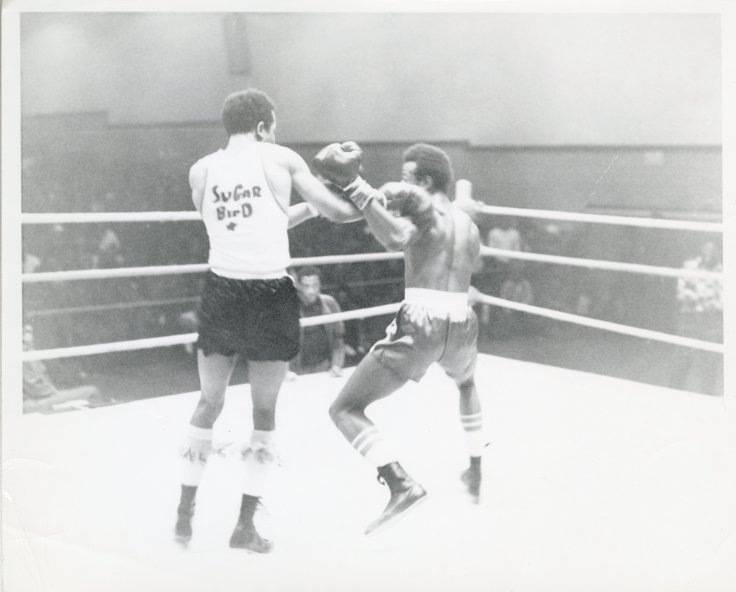 On a cold, gloomy evening in 1978, 1,400 men crowded into a Lewisburg, Pennsylvania boxing arena. Down in the ring they watched Clarence Miller of Camp Hill take on the reigning 125-pound state champ, Ronald “Bartender” Barr of Dallas. Of the 10 matches that Saturday, this was the only championship match and the crowd was in for quite a show. Miller “came out determined to unseat the champ” and attacked Barr with a flurry of blows. Within seconds, a vicious left hook caught Barr on the chin and knocked him to the canvas. Surprised but unfazed, Barr jumped to his feet and got right back in the fight. In the second round both fighters came at each other with unbridled fury, “giving lessons” one reporter wrote, “on what boxing and determination is all about.”

In the third round Miller hit Barr with dozens of jabs and put him on the defensive once again. Fueled by the roar of the crowd it looked like Miller might actually defeat the champ.

But by the end of the round Miller started run out of gas, he had used up too much energy early on. Seizing the opportunity, Barr pummeled Miller until the referee had to separate the two. Within moments, Miller was bested and Barr declared winner by unanimous decision. It was the best fight of the night and raucous fans gave the two men a standing ovation. At the end of the exhibition Barr was voted the outstanding boxer of the night “and no one in the crowd thought otherwise.”

Barr, Miller, and their fellow boxers put on an athletic display in Lewisburg that “promoters dream about.” Talent, showmanship, and athleticism were in large supply. But what made this match was so unique was that the boxers were all inmates in Pennsylvania’s state prison system and the fans all incarcerated at the federal penitentiary in Lewisburg. The match was the first live sporting event the institution had ever hosted. These men were no ordinary boxers, they were all members of a new rehabilitative prison boxing program that operated in the 1970s and early 1980s.

The 1970s were uncertain times for Pennsylvania prisons and the inmates and staff who lived in them to say the least. Tough law-and-order politics were putting Pennsylvanians behind bars at rates higher than ever before and by the end of the decade prisons were bursting at their seams. Demoralized officers constantly complained that the staff-inmate ratio was growing dangerously hazardous. On top of the rampant overcrowding most of the state’s prisons were aging and in disrepair, making living conditions difficult and dangerous for most inmates.

With fresh memories of the 1971 Attica prison riot in New York and several outbreaks of violence in their own prisons, Pennsylvania corrections officials anxiously looked for ways to ease tensions and maintain order among nearly 10,000 inmates and staff. Their first solution was to build several new prisons across the state. After this some believed that community-based rehabilitation programs and a more lenient parole system would help maintain control. Other officials suggested allowing inmates to grow their hair out or creating a responsive complaint system. Each of these strategies were implemented with some success, but none would pack as much of a punch as the inmate boxing program.

The boxing program was the brain child of newly appointed Corrections Commissioner William Robinson. An amateur boxer in his younger days, Robinson hoped that boxing would provide a physical and emotional outlet for inmates and prevent confrontations between frustrated inmates and officers. “I have always felt that the manly art of self-defense can only build character and add to the acceptance of one’s responsibility towards self-discipline” he wrote shortly after starting the program in 1976. Inmates had been allowed to box as part of their recreation privileges for decades, but this program was different. Now inmates would have the opportunity to compete against other institutions and even opponents from outside the prison system.

Attending boxing matches inspired them to take part in rehabilitation programs and get excited about reentering society at the end of their sentences.

In order to take part in the boxing program, inmates had to maintain good conduct records and attend classes in their prison’s school. Though prison officials initially supported the program for pragmatic reasons, it did more than just maintain order. Boxing provided opportunities for inmates to improve themselves and participate in activities outside their own cell block. In just a few years more than 1,400 inmates across the state were part of the boxing program. The best boxers from each state correctional institution were even invited to travel and compete against each other in exhibition matches held everywhere from Lewisburg Federal Penitentiary to the Allentown State Fair and Indiana University of Pennsylvania.

Exhibitions in the prisons proved to be incredibly popular amongst inmates who had few opportunities for entertainment or socializing. “Frankly, I was very surprised and would not believe it until I actually had a seat” one spectator from the Lewisburg Penitentiary wrote in 1978 “all I’ve found here is repression at every turn if its something for the individual or the inmate.” Other inmates wrote that attending boxing matches inspired them to take part in rehabilitation programs and get excited about reentering society at the end of their sentences.

Competition in inter-institutional matches was fierce and the top boxers were exceptional athletes. One of these was Billy Hines, incarcerated at the State Correctional Institution (SCI) at Camp Hill. The fifteen-year-old Hines took up boxing shortly after beginning his sentence. The warden recommended he learn to box to defend himself “in the face of long years of incarceration with adults” much older than he. In just a few years Hines honed his skills and won so many bouts that prison officials arranged for him to fight Muhammad Ali, at the time the reigning world heavyweight champion. In a five-round exhibition in Reading, Hines weathered a “withering barrage” from Ali yet managed to hold his own for several rounds. Though Hines lost, Ali was so impressed with the young boxer that he invited him to spar with him at his personal training camp.

Bernard Hopkins, a multiple time world middleweight champion, was the most successful fighter to come out of the state prison boxing program. An inmate at SCI Graterford from 1983 to 1987, the Philadelphia native discovered boxing while trying to turn his life around. “When I saw a guy murdered for a lousy pack of cigarettes, something in me snapped,” he later said, “I knew that I had to be responsible for turning my life around.” Hopkins found a trainer and mentor in cell block neighbor Michael Wilson, a former prison boxing champion himself. Wilson’s rigorous training regimen and experience boxing at SCI Graterford prepared Hopkins for a long and successful professional boxing career.

The boxing program was short lived and quietly ended in the mid-1980s after inmate strikes and hostage situations crippled state prisons in 1981 and 1983. State lawmakers and policy writers didn’t want to appear “soft on crime” and ended prison programs like boxing in favor of more punitive measures that strictly controlled inmate life. Instead of boxing, the Department of Corrections has since shifted its rehabilitative efforts into new programs like drug treatment, community work programs, and boot camp training.

Even in its heyday boxing could never have solved all of the problems in Pennsylvania’s prisons. Overcrowding, dangerous living and working conditions, and budget issues were simply too much for the boxing program to knock out on its own. Nevertheless officials did believe that it helped keep prison assaults and misconducts down by over 50%. As Pennsylvania adjusted to the realities of the modern prison system, the boxing program was an innovative and interesting response to the tensions that affected inmates.

Perhaps more importantly, the boxing helped restore some dignity its participants. SCI Pittsburgh superintendent James Howard found that boxing helped inmates take pride in themselves and gain community support and exposure. “Most importantly,” he said, “this exposure has been in a positive nature. The citizens of the Commonwealth have seen that institutions are not like those portrayed in movies or on TV screens and that our facility houses individuals who are human beings.”

*CORRECTION: This post originally misidentified Nick Santoro in the photograph with Billy Hines and Muhammad Ali. Many thanks to a family member who pointed it out!